Posted by Greg Schlueter at 1:27 PM No comments:

Posted by Greg Schlueter at 1:19 PM No comments:

ITEM 1: We're opening up the door and going in.... Today we're T-minus five days until the premiere- October 1, 2008. I'm excited because I've seen the First Episode (a distinct benefit of being the producer), and I know you'll be moved!
It'll be a fast but moving ride. In ten minutes you'll accompany me to the dark recesses where we'll encounter many tatoo-clad, pierced and culturally-diverse musicians-- members of EJ's band, Scarwork. I invite you to bring your stereotypes and see if they hold up. Then we'll take you to the last day of Waldameer, where Roy Hollis, Jr. has established quite the name for himself... you may be surprised by a thing or two. Finally, we'll go "on location" with photographer, Paul Lorei, to a family beach shoot at Presque Isle - you'll be captured by the stunning beauty of this tremendous gift we have in Erie.
ITEM 2: Last Thursday (September 18, 2008) the first of eleven billboards went up on I-90. This, along with an eblast announcing E-TV and good folks like you telling this story (thank you!), the site has received over 100,000 hits... the average visitor coming at least twice (over 1000 unique visitors) and staying over 6 minutes!
ITEM 3: Extraordinary Advertisers - looking for "that kind of company."

E-TV "promises" unparalleled advertising opportunity. But I'm looking for Extraordinary Advertisers - the kind you know by name, who understand and share the vision. At E-TV we're principally interested in people, affirming the "Big" that's inside every person, more than what may draw a crowd... or what one may see on the surface. When folks come to ErieAlityTV.com I want them to find the "Big" in themselves, and know that our advertisers connect with this... that they are "that kind of company."
Hardly just a sideshow, each advertiser space is an integral part of the entertainment- you'll find a "FUN CLIP" for each. Click it and you'll get to meet them, discover more about them as people-- what makes them tick. That's the mission.
So let me say a word for E-TV's first Extraordinary Companies.

Dahlkemper Landscape and Port Farms are each "that kind of company." If you have landscaping needs, make your first call to Dahlkemper Landscape (814/ 825-3253). If you want an incredible, Fun Fall Family experience, plan your trip to Port Farms now (see their E-TV Profile on our home page 814/796-4500)... our family goes there every year, sometimes more than once!
Thanks for reading.
Greg Schlueter
http://www.eriealitytv.com/
Posted by Greg Schlueter at 7:09 AM No comments:

I bought my first camera following the birth of our first child, Anne Marie, in 1997. She was named after my older sister who died shortly after birth. Something in there about wanting to immortalize life. Children awaken you in more ways than one! They release you from captivity to a clock, often leaving you bowing before a mystery. Suddenly you feel so small. Suddenly your eyes are opened beyond a mere wave to a vast ocean, where you find yourself aware of an ebb and flow of time. The whole thing captures you. That's when I bought the camera... an attempt capture what was capturing me.

So camera often in hand, I took miles of footage... every step, every word, every event. Anne Marie is as comfortable in front of the camera as Katie Couric, as are our five kids that followed. We would often create our own "on the spot" scripts in unique places, like when we hiked Wintergreen Gorge three years ago, or a family dance or music fest with family friends such as Bob Halligan of Ceili Rain (http://www.ceilirain.com/), or any number of big events I organized while leading a large youth and young adult program.

Any way, our family "video container" became a "video crate," which quickly became "video crates"... learning, learning, learning... and somewhere in there someone recognized I have a real talent for visual story telling, particulary of the inspirational type. Demand grew quickly and six years ago I began my own companies- film/video (Imago Dei Video Productions) along with vision/mission development and marketing (ID Genesys), which got tapped to do some pretty cool things - contributing to Disney/ Walden's Narnia, Warner Brothers Superman Returns and Lady in the Water, A&E's God or the Girl, Catholic Exchange's Champions of Faith.... On the video side I produced a film for Greater NYC Boy Scouts that won a national marketing award, and was the centerpiece to their development campaign which raised over $14 Million. I'm just finishing a film for national Boy Scouts of America that will be distributed nationally.

All of that for me was something like walking on the water, a combination of sinking and believing in something you've never done before, knowing you can't do it by yourself, not quite having proof that it can be done... but looking ahead and being captured by something, believing in something beyond words, that becomes your focus... that keeps you above water... and you keep going.

Looking back now it's amazing that we've been living this way for five years-- without a guaranteed pay check, without taking a dime from anyone. It's become a kind of a mission behind a mission-- a proclamation that we're all called to do something... we need to discover what we're meant to do and go for it, with everything we've got... to stick with it. We have a purpose.

So following the film for National Boy Scouts, I "knew" there was some new direction capturing me... I needed to venture out again. Something compelled me to go to Celebrate Erie (2008) to figure it out. Talk about an ocean! But I took the first step outside my comfortable boat, and again found myself walking! This time my focal point was the amazing beauty of individual lives... I saw a little of myself in just about everyone that passed, but connected with three, unique, very different, very special people.

So here I am, two weeks before billboards hit the City, still tweaking out the site, identifying advertisers... and trusting that the huge investment is worth it, that others will connect with the amazing thing I see... a "big" that has more to do with one person than with a crowd....

Thanks for reading.
Stay tuned. 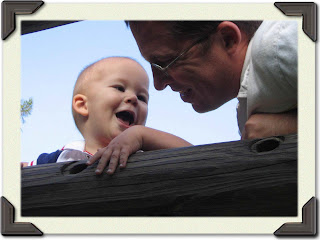